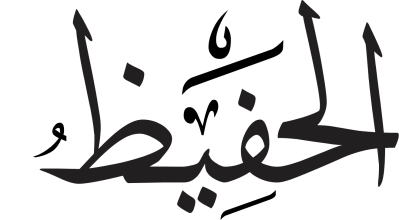 Male
Female
Child
The One Whose power preserves the heavens and the earth. He is the Guardian and Preserver of all the worlds. Al-Hafeedh is heedful of all the actions that we perform by His Knowledge and He protects His slaves from all kinds of hardship and evil. The One who protects whatever and whoever He willed to protect.
Allah, Exalted be He, says, “Allah is the best of protectors and the Most Merciful of the merciful.” (Surat Yusuf: 12:64); He also says, “My Lord is guardian over all things.” (Surat Hud: 12:57)
This name includes, among other things, Allah’s knowledge which encompasses all His slaves’ deeds, good and bad. He protects them from all forms of danger and guards the heavens and the earth and all that is in them.
It also includes the general protection He gives all His creatures without exception by paving the way for anything that is bound to protect them against harm, as well as the protection He affords His obedient servants against anything they hate, and against their enemy and their plots.

Being conscious of Allah’s presence, through our belief that He is aware of all our actions, and thus striving hard to watch our tonguesand actions.
Extolling Allah, revering Him above all else and worshipping none by Him, for He alone is the Protector of the universe.
>Relying on Allah, for nothing can be protected except by Him.
Using all possible means to obtain Allah’s protection by professing belief in His unity, showing obedience to Him and avoiding every thing He has prohibited.
Loving Allah, praising Him and showing gratitude to Him for the protection He affords us.

The One whose power preserves the heavens and the earth. The One who is the guardian and preserver of all the worlds.

The One who protects and preserves all of creation from perishing. The One who is vigilantly guarding every detail of all that has been created.

The One who remembers and preserves all that has ever been and all that is, while keeping under Divine protection the knowledge of all that shall be.

From the root h-f-z which has the following classical Arabic connotations:

to preserve, guard, protect
to keep, retain, take care of, tend
to prevent from perishing or becoming lost
to be watchful, mindful, attentive, vigilant

Note that the final letter in Hafīz, the Arabic letter z sounds nothing at all like the English letter z, but rather in Arabic it is a open-jaw “th” sound, although in Farsi and Urdu it is pronounced as a “z”.

Raqīb refers to the One who has the attribute of watchfulness.

Wakīl refers to the One who is the trusted administrator.

Hafīz refers to the One who protects and preserves.

Māni’ – the One who protects and defends against harmful situations.

Muhaymin refers to the One who is the ever-watchful guardian and protector.