AL-‘ALEE-The Most High, The Exalted The Sublime One 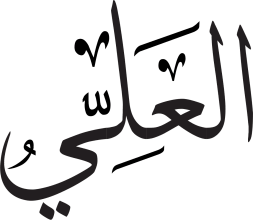 Male
Female
Child
The One Who is above and exceeds all others, there is nothing and no-one above Him. His Loftiness is absolutely perfect. He is the Highest. AI-‘Alee is above and surpasses all that has ever been, all that there now is, and all that shall ever be. The One who is clear from the attributes of the creatures.
Allah, Exalted be He, says,
“…He is the Most High, the Magnificent.”

Allah has absolute highness above all else, regarding His Supreme Being, ability, subjugation of His creatures and His attributes. He has established Himself over the Mighty Throne in a manner that befits His majesty and manages all affairs, Glorified and Sublime be He. He is high above His creation and everything and everyone is under His absolute control and superior authority.

Showing total humility to Allah, Exalted be He, out of love and veneration, which are the two pillars of worship in Islam. It is for this reason that when Allah, Exalted be He, revealed the verse, “Glorify the name of your Lord, the Most High…” (Surat Al-A’laa, 87:1), the Prophet (may Allah bless him and grant him peace) said, “Say this in your prostrations.” (Reported by Ahmad and Abu Daawood).
Exalting Allah and humbling ourselves before Him and for the truth He has sent down.
Refraining from exalting ourselves in the land, oppressing people, looking down on them, behaving arrogantly towards them and harming them.
Fearing none but Allah and not fearing anyone no matter how important he may be, for Allah, Exalted be He, is above all.
Declaring Allah free of any imperfections in His Supreme Being, attributes and actions, affirming the attributes of perfection to Him and praising Him for them.

The One Who is above and exceeds all others. The Most High, above whom there is nothing higher.

The One whose rank and station are the Most High.

The One who is above and surpasses all that has ever been, all that there now is, and all that shall ever be.

From the root ‘a-l-w which has the following classical Arabic connotations:

to be high, elevated, lofty
to be exalted, to rise up, to ascend
to be higher, to exceed, surpass
to overcome, overwhelm
to advance, promote, rise above
to mount, be overtop, eminent