AL-‘ATHEEM-The Magnificent One The Supreme 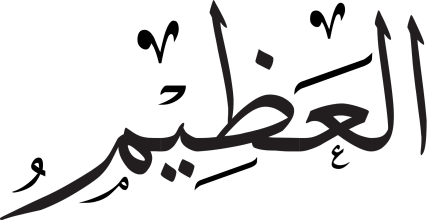 Male
Female
Child
The One Who is greatest, mightiest, grandest and above all He has absolute greatness in both his attributes and self. All His actions are Perfect. He is the one deserving the attributes of exaltment, glory and purity from all imperfection. His Might and Grandeur is surely beyond our grasp. The One deserving the attributes of Exaltment, Glory, Extolement, and Purity from all imperfection.
Allah, Exalted be He, says, “He is the Sublime, the Tremendous.” (Surat Al-Baqarah, 2:255).
Allah is Great and Tremendous in His Supreme Being, in His names, in His attributes and in His actions. This name comprises all attributes of greatness and no one comes close to Him in greatness. Therefore, none of His creatures deserves to be exalted as He should be. His greatness is celebrated by the heart, the tongue and the limbs, in all humility.
One of the things that prompt us to exalt Allah, Glorified be He, is to contemplate the greatness of the Creator through whatever He has created, His management of all affairs and His subjugation of tyrants.

Showing total humility towards Allah, loving Him and worshipping none but Him.
Rejecting the claim that He has partners or rivals.
Affirming all His names and attributes which He has confirmed for Himself or confirmed by His Messenger (may Allah bless him and grant him peace) without changing their meanings, denying them completely or likening them to those of any of His creatures.
Honouring whatever Allah has commanded and prohibited, wholeheartedly accepting them and acting on His commands, and not giving precedence to any opinion or logical reasoning over the texts of the Qur’an and the Prophet’s Sunnah.
Honouring Allah’s sacred rites by performing them as He has commanded, following in the footsteps of the Prophet (may Allah bless him and grant him peace), showing total sincerity in all our actions, not transgressing the limits Allah has set by avoiding things He has prohibited, showing concern for His sacred rites and showing anger when their sanctity is violated. Allah, Exalted be He, says, “Whoever honours the sacred rites of Allah, for him it is good in the Sight of his Lord.” (Surat Al-Hajj, 22:30).

The One who is greatest, mightiest, grandest and above all.

The One who is of the greatest importance.

The One who is magnificent, vast and most revered.

The One who is of perfect and absolute greatness.

From the root ‘a-z-m which has the following classical Arabic connotations:

to be great, large, big
to be vast, huge, enormous
to be great in rank, importance or dignity
to be imposing, powerful, superior
to be magnificent, honored, revered, sublime
to be immense, stupendous, lofty
to be above imperfection

Note that the Arabic letter z sounds nothing at all like the English letter z, but rather is a open-jaw “th” sound.

Jalīl is considered to be greatness in attributes.

Kabīr denotes the One whose essence is greatness.

Azīm is greatness in both attributes and self.

Mutakabbir is an empathic form which denotes actively using rights, privileges, rank and attributes that are above and beyond the rights of everyone else.