AL-AAKHIR-The Last The Infinite Last One 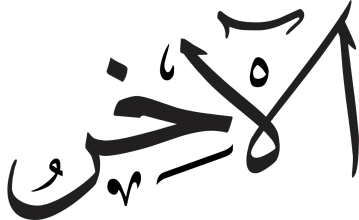 Male
Female
Child
The One who is the last and the ultimate. He is the One who remains after the creation perishes and the One beyond whom there is nothing. The One whose Existence is without an end.
Allah, Exalted be He, says, “He is the First and the Last, the Outward and the Inward; and He has full knowledge of all things.” (Surat Al-Hadeed 57:3)
Meaning: Al-Awwal (The First): There was nothing before Him and everything other than Him He brought into existence from absolutely nothing. Al-Aakhir (the Last): There is nothing after Him and, being Infinite, He will exist for all eternity.

The One who remains after all of creation has passed away.

The One who is the last, the conclusion, the ultimate.

The One who is behind all of creation. The One beyond whom there is nothing.

From the root a-kh-r which has the following classical Arabic connotations:

to put back, to put behind, to be latter
to postpone, to put at the end
to be last, final, ultimate

The name al-Mu’akhkhir (the delayer) also comes from this same a-kh-r root.