AL-AZEEZ-The All Mighty The Mighty One 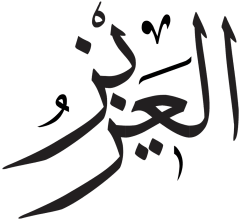 Male
Female
Child
The One who overpowers everything and Who cannot be overcome. It also refers to the One who is extremely precious, none is like Him. He is unbeatable and nothing can prevent Him from fulfilling what He wills. The Defeater who is not defeated.
Allah, Exalted be He, says, “… And know that Allah is All-Mighty, All-Wise.”(Surat al-Baqarah, 2:260)
Allah, Exalted be He, is the possessor of all might, strength, dominance and has the total ability to subjugate everyone and everything. All His creatures humble themselves before Him. He has subjugated all of them. He is the Sovereign who honours whomever He pleases and abases whomever He pleases.

Testifying that Allah is the only God who deserves to be worshipped with out any partners, for partnership contradicts perfect might and honour.
Declaring that He is free from every evil and imperfection and glorifyingand venerating Him.

Fearing Allah, seeking refuge in Him, renouncing any claim to might and power, attributing all might and strength to Him alone, for His command will surely come to pass, and asking Him to make us righteous and help us adhere to the truth.

The One who is the most Powerful and most Cherished. The victorious One whose strength, glory and power are overwhelming and cannot be overcome or resisted.

From the root ‘-z-z which has the following classical Arabic connotations:

to be mighty, potent, strong, powerful
to be high, elevated, noble, exalted
to be honorable, noble, glorious, illustrious
to be indomitable, invincible
to be respected, cherished, dear
to be scarce, rare, precious, unattainable