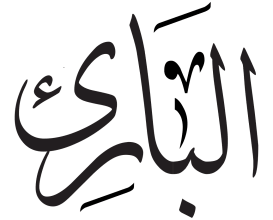 Male
Female
Child
The One who is the Originator of everything. He is the Creator and The One who gives distinguished characteristics to all of His Creation. Al-Bari’ knows His creation best. The Creator who has the Power to turn the entities.
Allah, Exalted be He, says, “He is Allah, the Creator, the Originator, the fashioner.” (Surat Al-Hashr, 59:24)
Allah causes things He has decreed to exist out of nothing and in a specific manner.

The One who evolves and re-creates that which exists, both physically and spiritually.

The One who sends new forms into existence.

The One who manifests that which is in perfect harmony and proportion, without blemish or fault.

From the root b-r-‘ which has the following classical Arabic connotations:

The Qur’ān commentary of al-Baydāwi says that the primary meaning of the root b-r-‘ is to denote a thing’s becoming free and clear of another thing, either by being released or by being created.

The ancient Semitic roots point toward a manifestation or emanation which is the fruition of a great power, and which contains the potentiality of that which brought it into being.

Badī’ denotes the One who creates in wonderful, amazingly original ways that have no precedent whatsoever, ways that are awesome innovation.

Khāliq denotes the One who continues to plan, measure out and create, and who has the power to change things from non-existing to existing.

Musawwir denotes the One who arranges forms and colors, and who is the shaper of beauty.

Mubdi’ denotes the One who starts or begins all things, or that which has precedence given to it.