AL-BADEE’-The Incomparable Originator The Unique One 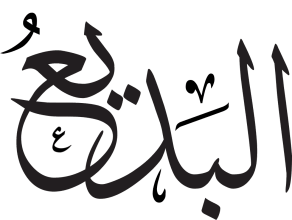 Male
Female
Child
Al-Badee’ is the unique Originator. He is the One whose incomparable power originates, invents and brings into existence all of the unique creation without following any prior model or unlike any similarity to anything that ever existed.

The marvelous One who originates, commences, invents and creates all that exists, without any model or material.

The One whose incomparable will-power first brings into existence all of the unique and amazing creation without any similarity to anything else that has ever existed.

The One who creates in wonderful, awesome, amazingly original ways that have no precedent whatsoever.

From the root b-d-‘a which has the following classical Arabic connotations:

to introduce, originate, start, innovate
to do for the first time, and not after the similitude of anything pre-existing
to cause to exist, to bring into existence
to devise, to uniquely contrive
to be amazing, outstanding, marvelous, superlative, incomparable

In honoring the One Creator, it has been said that mankind does not truly create, but rather merely discovers that which Allāh has already created.

The ancient Semitic roots of b-d-‘ point toward everything which is blossoming into existence and becoming apparent or exposed, with a sense of separation and individuality.

The expression al-Badī’ refers to the Creator as well as that which is created.

In some Classical Arabic literature, the participles Mubdi’ andBadī’ are used interchangeably. However, in many Qur’ān commentaries, these terms are used to describe slightly different attributes, with the name Mubdi’ emphasizing the initiation of creation, while Badī’ emphasizes the awesome innovation of such creation.

Mubdi’ is the One who initiates, starts or begins the production or creation of all things.

Badī’ is the One who creates in awesome, wonderful, amazingly original ways that have no precedent whatsoever.

Mu’īd is the One who repeats, restores and revives that which had been previously invented.

Khāliq is the One who continues to plan, measure out and create and who has the power to change things from one state to another, in and out of existence.

Musawwir is the One who arranges forms and colors, and who is the shaper of beauty.