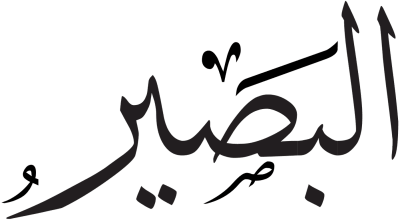 Male
Female
Child
The One Whose insight sees all things clearly, even the smallest act and both the apparent and the hidden. He is the One who sees and understands all that has been, and all that will be. The One who Sees all things that are seen by His Eternal Seeing without a pupil or any other instrument.
Allah, Exalted be He, says, “Surely, He is aware of and sees His servants.” (Surat Ash-Shooraa: 42:27)
This name means that His sight encompasses everything that is conceivable, hidden or apparent, no matter how hidden or small it may be. It also means that He has knowledge of everything and anything about it that is hidden.

Affirming that Allah’s sight encompasses every conceivable kind of seeing in unrestricted or absolute vision and in a manner befitting His majesty.
Being aware of Allah’s presence, fearing Him and avoiding anything wrong when we know He can see us.
Doing good deeds for His sake and in a proficient manner.
Submitting to His will and accepting His decree, for He is aware of those of His slaves who deserve to be guided.
Keeping one’s composure, exercising patience and anticipating Allah’s rewards in the hereafter when subjected to afflictions of any type.

The One whose insight sees all things clearly, both the apparent and the hidden. The One who sees and understands all that has been, and all that will be.

From the root b-s-r which has the following classical Arabic connotations:

to see, behold, notice
to understand, to know
to perceive, to have insight
to be acutely aware