AL-GHAFFAR-The All- and Oft-Forgiving The Great Forgiver 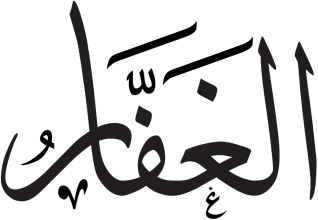 Male
Female
Child
The One who is forgiving and looking over our faults over and over again. He also protects us from the effects of our mistakes, in this life and the next so we may go on without shame or guilt. He is the One who can change our wrong deeds into good deeds. The One who forgives the sins of His slaves time and time again.
>Allah, Exalted be He, says, “Allah is the Ever-Forgiving, the Most Merciful.” (Surat Ash-Shooraa 42:5) He, Exalted be He, also says, “Is He not indeed the Almighty, the Endlessly Forgiving?” (Surat Az-Zumar, 39:5); “The Forgiver of sin, the Acceptor of repentance…” (Surat Ghaafir, 40:3)
The name Al-Ghafoor is derived from Al-ghafr, which means “concealment, covering’. The name, as applied to Allah, Exalted be He, means the One who conceals the sins of His servants, shows immense compassion to them, lavishes kindness on them, does not hasten to punish the sinners and does not expose their sins to everyone.
Al-Ghafoor is the One who continues to forgive sins and accept the repentance of those who repent.
The name Al-Ghaffaar points to His immense forgiveness.

Loving Allah, praising Him and thanking Him for His mercy towards His servants and for forgiving their sins. This positive effect instils in the believer’s heart the strong desire to obey Allah, Glorified and Sublime be He, and to avoid anything He does not approve.
Thinking well of Allah and having good expectations of Him, and never despairing of His mercy and grace.
Striving hard to win Allah’s forgiveness. Forgiveness of one’s sins can only be won by meeting its conditions and requirements. Allah, Exalted be He, says, “If you are righteous, He is Ever-Forgiving to those who turn to Him in repentance.” (Surat Al-Israa’, 17:25)
Calling upon Allah, Glorified and Sublime be He, by this beautiful name to forgive our sins and protect us against their evil effects.
Doing our best to acquire and develop the trait of forgiving people and covering their faults.

The One who accepts repentance and veils or forgives our faults and sins, time and time again. The One who sets us free from the guilt and shame of our own sins and faults, such that we may discover inner harmony and peace.

The One who veils, forgives or transforms our faults and sins in such a manner that we may go on without guilt or shame. The One who can set aright, or transform, wrong deeds and change them into what become good deeds.

From the root gh-f-r which has the following classical Arabic connotations:

to cover, veil, conceal, hide
to pardon, to forgive, to set aright
to cover a thing to protect it from dirt

Every creature is bound to have perfection and imperfection, or ugliness and beauty, so whoever overlooks the ugly and mentions only the beautiful is one who shares in this attribute.

Note that the root gh-f-r has given rise to three Beautiful Names that are all used in the Qur’ān: Ghaffār,Ghafūr and Ghāfir. However, only Ghaffār and Ghafūr were included in the list of 99 Names narrated by Tirmidhi.

In Qastalānī’s commentary on Bukhārī, it is said that the root gh-f-r means a covering or protection which is either between man and the commission of sin [protecting, or watching over], or between sin and the effects of that sin [forgiving, veiling or concealing].

The Arabic word astaghfirullāh  (sometimes written as astghfrallāh or estaferallah) is from this same gh-f-r root, and is an invocation of Divine Protection having a range of possible connotations that include Allāh please forgive me, Allāh please hide away my faults, Allāh please watch over me and protect me from faults.

The Arabic lexicon and commentary Tāj al-‘Arūs reminds us that truly asking for forgiveness must be by both word and deed, not by the tongue alone.

The names Ghafūr, Ghaffār and Ghāfir denote forgiving or protecting, while ‘Afūw indicates complete removal or obliteration of the condition.