AL-HALEEM-The Most Forbearing The Clement One 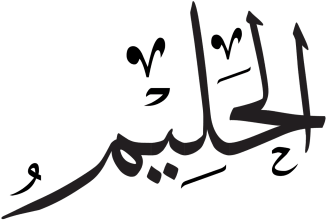 Male
Female
Child
The One Who keeps bestowing blessings, both visible and hidden, on His creation, even though they disobey Him and make many mistakes. So He forgives and does not give the sinners the punishment they deserve; He encourages them to repent and gives them time to turn to Him. The One who delays the punishment for those who deserve it and then He might forgive them.
Allah, Exalted be He, says, “Allah has pardoned them. Allah is Ever-Forgiving, All-Forbearing.” (Surat Aal-Imraan: 3:155).
This name means the One who is so patient that He does not punish His slaves for any sin they commit; rather, He gives them then to Him in repentance. He forgives them, in His immense mercy, even though He can, without delay, punish them for the sins they commit.

Loving Allah, showing due respect to Him and feeling ashamed to do things He does not like, hastening to obey Him and refraining from disobeying Him.
Hoping for His mercy and not despairing of it, hastening to seek Allah’s forgiveness no matter how big the sin one has committed may be, for Allah only postpones punishment so that sinners may turn to Him in repentance and seek His forgiveness.
Taking care not to make Allah angry, for His forgiveness and for bearance does not mean that He is unable to punish the sinne Rather, He gives them the opportunity to turn to Him in repentance. When Allah, the Forbearing, becomes angry, He becomes very angry indeed.
Allah does not hasten to punish the unbelievers or to grant victory to the believers; rather, He, in His infinite wisdom, displays total forbearance in these cases.
Striving hard to acquire the quality of being forbearing, for Allah loves those who are forbearing and patient.

The One who is kind, gracious and serene in all situations.

The One who is calm and deliberate, never hasty, even with the rebellious and wrongdoers.

The One whose manner is lenient and mild.

The One who gives us the opportunity and situations to learn to be kind, gracious and patient.

From the root h-l-m which has the following classical Arabic connotations:

to be forbearing, mild, lenient, clement
to be forgiving, gentle, deliberate
to be leisurely in manner, not hasty
to be calm, serene
to manage one’s temper
to exhibit moderation

Halīm is the patience that arises from a sense of deep serenity, lenience, calm deliberation.

Sabūr is the patience that arises by self-restraint, enduring something without complaint.