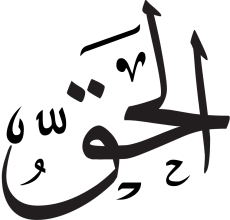 Male
Female
Child
The One Who is the the and truly-existing. His essence is the only reality and He is the One through whom the truth, all righteousness and justice are revealed. His Word, Actions, Reward, Punishment and Promise are the truth. The One who truly exists.
Allah, Exalted be He, says, “Exalted be Allah, the True King.” (Surat Al-Mu’minoon, 23:116)
He is the One who truly exists and who is undeniably the Lord and King, the One who is perfect regarding His actions and attributes. His speech, His decree, His promise and His legislation is the truth.

The One who directly and ever-presently observes everything in creation. The One from whose knowledge nothing is hidden.

The One who is the ultimate witness on judgment day.

From the root sh-h-d which has the following classical Arabic connotations:

to bear witness
to offer testimony
to have knowledge of, to experience
to be present with