AL-HAYY-The Ever-Living The Eternally Living One 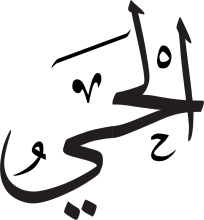 Male
Female
Child
The One who has a continuous life with no beginning or end. His Life with all His Attributes are perfect end there is no end to His existence. He was before all else, so shall He remain throughout endless time. The One attributed with a life that is unlike our life and is not that of a combination of soul, flesh or blood.
Allah, Glorified and Sublime be He, says, “Allah, there is no god but He, the Ever Living, the All Sustainer…” (Surat Al-Baqarah, 2:255)
This name means the One who never dies. His life is perfect, which requires all perfect attributes and negates all their opposites in every sense. This perfect attribute requires that neither sleep nor slumber overtakes Him.

The One Life from whom all life arises. The One who calls all life into being.

The One who animates all life and who makes each living thing different and distinct.

From the three letter root h-y-y, which has the following classical Arabic connotations:

to live, to be living
to become apparent, distinct
to animate, to revive
to vitalize, to call into being
to be whole, sound
to call, summon, invite, hasten

Abu Hurairah reported that whenever the Prophet, peace be upon him, was faced with a serious difficulty, he would raise his head to the sky and supplicate, “Subhan-Allah al-‘Azim (glory be to Allah, the Mighty).” And when he implored seriously and strongly, he would say “Ya Hayyu, Ya Qayyum (O Ever-Living One, O Self-Existing One).”    (hadith of Tirmidhi)