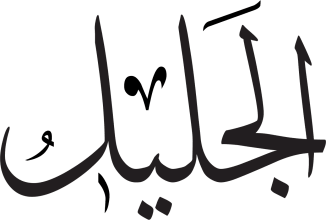 Male
Female
Child
The One who is attributed with Greatness of Power and Glory of Status.

The One who is above all, superior, independent.The One who is the owner and the source of all attributes of greatness and majesty.

The One whose greatness and majesty are immeasurable and cannot be comprehended by the senses. The One whose glorious nature is indicated by the great things that are created.

From the root j-l-l which has the following classical Arabic connotations:

to be supremely great
to be glorious, majestic
to be sublime
to be high, lofty, far above, independent

The term Jalīl is not specifically used as a Beautiful Name in the Qur’ān.

The word Jalāl comes from this same root and is translated as greatness, loftiness, sublimity, majesty.

Jalīl is considered to be greatness in attributes.

Kabīr denotes the One whose essence is greatness.

Azīm is greatness in both attributes and self.

Mutakabbir is an empathic form which denotes actively using rights, privileges, rank and attributes that are above and beyond the rights of everyone else.