AL-LATEEF-The Subtle One, The Most Gentle The Knower of Subtleties 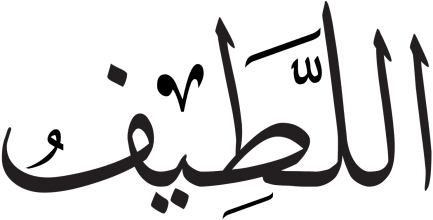 Male
Female
Child
The One who is Most knowledgeable of the most subtle details. His actions are so fine and subtle that they may be beyond our comprehension. He bestows gifts that are finely suited to the needs of His creation. He is extraordinarily gracious and understanding. He guides us and treats us with a kindness without us perceiving it. The One who is kind to His slaves and endows upon them.
Allah, Exalted be He, says, “No vision can grasp Him, but His grasp is over all vision, and He the Al-Subtle, the All-Aware.” (Surat Al-An’aam, 6:103)
Al-Lateef means the One who has knowledge of all things, subtle and hidden, and the One who shows His immense mercy to His slaves and shows them ways leading to goodness invery subtle ways not known to anyone.
He is also the One who is fully aware of all the secrets, and what is yet more hidden, and the One who shows immense kindness to His slaves by fulfilling their needs, in His all-encompassing kindness and in ways they do not perceive.

Positive effects of Allah’s subtlety and graciousness to His slaves include the following:

He determines their sustenance, knowing full well what is best for them, according to His foreknowledge and immense wisdom, but not as a result of His slaves’ own desires.
He inflicts trials and tribulations on them to multiply their rewards and raise them to higher degrees of honour in the hereafter.
He does not test His servants with weak faith by subjecting them to tests that might otherwise undermine their faith and certainty.
He makes the sins His slaves commit a means to turn in repentance to Him.
He makes His righteous servants abhor whims and desires so that they would not incline to them.

Loving Allah and experiencing peace and tranquillity in His presence for being so subtle and so gracious that He does not punish us and continues to bestow His blessings on us and fulfil our needs in ways we do not perceive.
Experiencing tranquillity and serenity which this beautiful name instils in our hearts.
Demonstrating true reliance on Allah, Glorified and Sublime be He, happily accepting whatever He decides for us and repeatedly reciting the supplication in which we seek Allah’s guidance when we are not sure about a choice (du’aa’ al-istikhaarah), fully assured of Allah’s wise decision for us and His graciousness to us.
Bringing ourselves to account and avoiding acts that show disobedience to Allah, for Allah, Exalted be He, is fully aware of all our actions, no matter how small they may be, and “He is the All-Subtle, the All-Aware.” (Surat Al-Mulk, 67:14)
Striving hard to acquire this excellent quality and trying our best to be gracious to others, being gentle with them, showing kindness to them, loving good for them and even doing it for them and hating to harm them in any way.

The One who is most subtle and gracious. The One whose nature is gentle, affectionate, courteous and refined.

The One who is kind, gracious, and understanding, with regard for the subtle details of individual circumstances.

The One whose actions are so fine and subtle that they may be imperceptible, beyond our comprehension.

The One whose delicate perception reveals the subtleties of all things.

From the root l-t-f which has the following classical Arabic connotations:

to be thin, delicate, refined, elegant, graceful
to be gentle, gracious, courteous, kindly
to be subtle, to know the obscurities of all affairs
to treat with regard for circumstances
to be most soothing and refined in manner
to treat with kindness, goodness, gentleness, benevolence, affection

The names Qahhār (ever-dominating, overpowering) and Latīf (subtle, refined) are sometimes used together to honor and appreciate the opposing, yet complementary, ways of the One