AL-MUHAYMIN-The Guardian, The Witness, The Overseer The Preserver of Safety 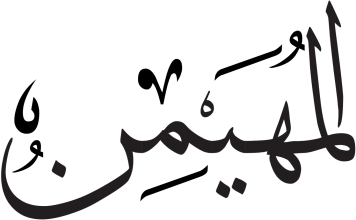 Male
Female
Child
The One who observes His creation with regards to their actions. It is also The One Who offers peace and security and The Trustworthy One who proclaims the Truth. He is the One who always watches us and looks after us. The One who witnesses the saying and deeds of His creatures.
Allah, Exalted be He, says, “…the Holy, the Source of peace, the Granter of security, the Ever Watchful, the Almighty, the Compeller, the SupremelyGreat…” (Surat Al-Hashr, 59:23)
Allah testifies to His Oneness and Unity with substantial evidence and confirms the truthfulness of His messengers and their followers.
He is also the One who grants peace and security to His slaves/creatures, assuring them that He will not wrong them in any way and provides peace and security to His righteous servants. This becomes evident in the peace and tranquillity they find in their hearts, as well as the absence of fear when they turn to Him.

The One who faithfully bestows the gifts of peace, safety and security.

The One who grants freedom from fear.

From the root ā-m-n which has the following classical Arabic connotations:

to be secure, safe, free from fear
to be quiet, tranquil
to grant protection, safeguard
to be trusted, trustworthy
to believe in

The word īmān, often simply translated simply as faith or belief, comes from this same ā-m-n root, and could well be translated as has been granted peace and security.

The word āmīn, often translated simply as amen, also comes from this same ā-m-n root, and could be translated as in this we trust or in this we are free from fear.

The root ā-m-n root is also the original source of the name al-Muhaymin (the protector).

Raqīb refers to the One who has the attribute of watchfulness.

Wakīl refers to the One who is the trusted administrator.

Hafīz refers to the One who protects and preserves.

Māni’ – the One who protects and defends against harmful situations.

Muhaymin refers to the One who is the ever-watchful guardian and protector.

Mu’min – The One who grants security and freedom from fear.