AL-QAABID-The Withholder The Restricting One 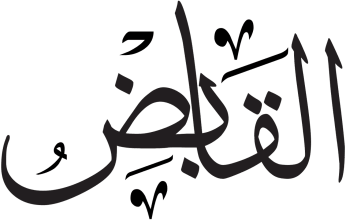 Male
Female
Child
Al-Qaabid, Al-Baasit is the One who withholds and extends. He contracts when it is good and He expands when it is good. At time He withholds and at other times He gives. This goes for provisions (rizq), life and death. The One who constricts the sustenance by His wisdom and expands and widens it with His Generosity and Mercy.
The Prophet (may Allah bless him and grant him peace) said, “Allah is the one Who fixes prices and who withholds and gives abundantly.” (Reported by At-Tirmidhee and Abu Daawood)
The meaning of these two names is included in the verse, “Allah withholds and gives abundantly.” (Surat Al-Baqarah, 2:245)
These two names are among those names of Allah which always come together, for absolute perfection is realised in their combination, and they cannot be used separately. Allah is the One who takes away souls, provision and whatever He pleases as well as the One who gives sustenance, mercy and whatever He wishes. He does this in His infinite wisdom and absolute knowledge. He stretches out His Hands so that sinners may repent and turn to Him.

Loving Allah who shows mercy, provides sustenance, gives abundantly and who is the only one who can give and withhold.
Relying on Him and entrusting our affairs to Him alone, Exalted be He.
Showing contentment with whatever Allah provides and whatever He takes away, which He does in His infinite wisdom and absolute knowledge.
The best thing we can ask Allah for is guidance, mercy and forgiveness. Apart from this, we can only ask for things sanctioned by His law.
Taking care not to use what Allah has given us to do things that may bring His wrath on us; rather, we should show gratitude to Him.

The One whose wisdom may elect to withhold joy and expansion of the heart.

The One in whose hand all hearts are held. The One whose hand collects all souls at the time of death.

From the root q-b-d which has the following classical Arabic connotations:

to take in the hand, clutch, lay hold of
to grasp, grip, seize, hold firmly
to have absolute ownership of something (hold in the hand)
to give and take (hand over and take in hand), barter
to contract, shrink, draw together, collect together
to draw in (as a bird contracting a wing)
to withhold, make scanty, make scarce
to contract the heart, i.e. distress, depression, lack of joy

The name Qābid is not specifically used as a Beautiful Name in the Qur’ān.

The underlying roots of Qābid give a sense of give and take, a movement back and forth, an underlying rhythm of ebb and flow, like the rhythmical folding and unfolding of a bird’s wings in flight, or the rising and setting of the sun, or the endless cycles of life and death.

The Arabic lexicon and commentary Tāj al-‘Arūs, as interpreted by E.W. Lane, says:

Qabd [Qābid] and Bast [Bāsit] are terms applied by the investigators of truth among the Sūfīs to the two contrary states of the heart, from both of which it is seldom or never free: the former being an affection of the heart withholding it from dilation and joy; whether the cause thereof be known, as the remembrance of a sin or an offense, or of an omission, or be not known…