AL-QAYYOOM-The Sustainer The Self-Subsisting One 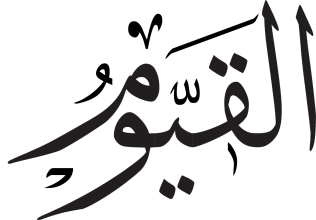 Male
Female
Child
The One who is established on His Own and by Whom all things subsist. He sustains, protects and oversees. He provides, preserves, watches and manages all that exists. He needs no food nor drink, for He is the One who feeds but is not fed. He is absolutely free of any need from all of the creation. The One who remains and does not end.
Allah, Glorified and Sublime be He, says, “Allah, there is no god but He, the Ever Living, the All-Sustainer…” (Surat Al-Baqarah, 2:255)
Al-Qayyoom is the Self-Sufficient Master who is not in need of anyone, everything exists because of Him and everything other than Him needs Him and totally depends on Him.
Al-Qayyoom also means the Everlasting One who never dies. This name entails that He is so perfect that neither slumber nor sleep overtakes Him.

Loving Him, Exalted be He, praising Him and venerating Him.
Not trusting our power and strength, showing total dependence on Allah, asking none but Him to grant our requests and fulfil our needs and seeking no one’s help and support except His.
Being more profoundly attached to Allah, the Ever Living, the Eternal Sustainer, and showing total dependence and reliance on Him.
The names Al-Hayy, Al-Qayyoom (the Ever-Living, the All-Sustainer) are so special that invoking Allah, Exalted be He, by them will help us have our prayer answered and distress removed.
Fearing Allah, Exalted be He, and being aware of His constant presence, for He watches every person and sees everything he does.

The One whose nature it is to exist. The One who is free of any dependence on anything else for existence.

The Ever-Living, Self-Existing One who is the foundation upon which all things exist.

From the root q-w-m which has the following classical Arabic connotations:

to stand up, to rise up, to ascend, become high
to begin, to start, to come to pass
to arise, to set out
to be on-going, to exist
to be founded, to be built on
to undertake, to carry out, to manage
to make aright, straighten out, accurate, exact
to make righteous, upright

Abu Hurairah reported that whenever the Prophet, peace be upon him, was faced with a serious difficulty, he would raise his head to the sky and supplicate, “Subhan-Allah al-‘Azim (glory be to Allah, the Mighty).” And when he implored seriously and strongly, he would say “Ya Hayyu, Ya Qayyum (O Ever-Living One, O Self-Existing One upon Whom we all depend).”    (hadith of Tirmidhi)

The attribute of al-Qayyūm is also nicely described by the words of Acts 17:28 which say:

in Him we live and move and have our being

The name al-Qayyūm also has much the same meaning as the Hebrew phrase in Exodus 3:14

and which is often translated as I am that I am, or I am that which I have become.

As Sri Aurobindo wrote in his commentary of the Isha Upanishad:

God is the only Being and all other existences are only His becomings.