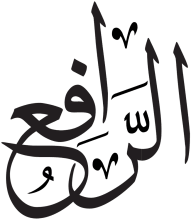 The One whose wisdom chooses the ones to be uplifted.

The One who uplifts and elevates mankind above petty desires and selfishness.

The One who makes it possible to rise above the differences and distinctions that divide mankind.

From the root r-f-‘ which has the following classical Arabic connotations:

to raise or elevate something
to uplift, to take it up
to make high, lofty
to exalt, make honorable, make eminent
to bring a thing near

The name Rāfi’ is not specifically used as a Beautiful Name in the Qur’ān.

The names Khāfid and Rāfi’ are often used together to acknowledge the way that balance and harmony are established and maintained though the interplay of cause and effect.

Mu’izz (honorer) is similar to, but much more more intensive and glorious than, Rāfi’ (uplifter).

The phrase al Khāfid ur Rāfi’ is often used to honor these complimentary attributes.