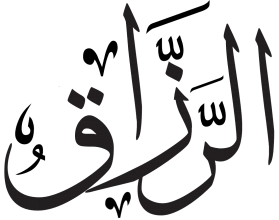 Male
Female
Child
The One who creates all means of nourishment and sustenance. He is The One who provides everything that is needed (rizq). It means that He bestows all means of support and growth, for the body, the mind and the spiritual life.
Allah, Exalted be He, says, “Provide for us; for You are the best of providers.” (Surat Al-Maa’idah, 5:114) He, Exalted be He, also says, “Allah is the great Sustainer, the Mighty One, the Invincible.” (Surat Adh-Dhariyaat, 51:58)
This name generally means that Allah is the sole provider of all His creatures’ sustenance, for there is not a creature on the earth but Allah provides its sustenance. In fact, His sustenance includes both the righteous and the wicked whom He enables to find means of sustenance in this life.
He also takes it upon Himself to grant, in His immense mercy and grace, His righteous servants special provisions, foremost of which are the blessings of faith, Islam, beneficial knowledge and lawful earnings, in addition to the eternal bliss He has in store for them in the hereafter.
The name Ar-Razzaaq points to the immense sustenance He provides for His creation.

Loving Allah and thanking Him for His bountiful provisions which He extends to all His creation without exception, and asking no one for anything except Him alone.
Experiencing peace and tranquillity, not worrying about sustenance or fearing anything when our source of income decreases or stops for some reason, and trying not to seek it through unlawful means.
Being confident that Allah is the All-Provider (Ar-Razzaaq), a beautiful and comprehensivename that incorporates a number of perfect attributes. He is All-Wise (Al-Hakeem), the Ever Subtle (Al-Lateef), the Ever Aware (Al-Khabeer), the Ever Able (Al-Qadeer) and the Most Merciful (Ar-Raheem). Therefore, He provides for His slaves in His infinite wisdom, immense ability and absolute knowledge.
Being confident that the difference between people regarding sustenance ifs due to Allah’s infinite wisdom and He does not give His slaves equally because He knows what is best and most appropriate for them.
The best and most beneficial form of provision in this life is religious knowledge, faith and guidance, and the best form of provision in the hereafter is winning Allah’s good pleasure and admission into Paradise.
Trying to earn a livelihood by adopting worldly means and religious means that leads to it, such as piety and consciousness of Allah. Allah, Exalted be He, says, “Whoever keeps his duty to Allah, Allah will appoint a way out for him, and He will provide for him from [sources] he never could imagine.” (Surat At-Talaaq 65:2-3)
Trying our best to show generosity and avoid stinginess and tight-fistedness.

The One who creates all means of nourishment and subsistence. The One who is the giver of all things beneficial, both physical and spiritual. The One who provides everything that is needed.

The One who causes the means of subsistence to come. The One who bestows all means of support and growth, for the body, the mind and the spiritual life.

From the root r-z-q which has the following classical Arabic connotations:

to receive something beneficial, especially as a gift
to be provided with the necessities of life
to receive a portion, share or lot
to be supplied with a means of subsistence

The root r-z-q points to the idea of the receiving of anything beneficial, particularly a gift, whereby something is nourished, sustained, or helped to grow physically, mentally or spiritually.