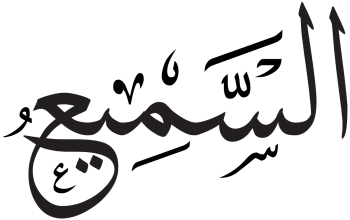 Male
Female
Child
The One Who hears all sounds and voices, in all of their different languages and all their many and various needs. He is the All-Hearing, the The Ever-Listening. The One who Hears all things that are heard by His Eternal Hearing without an ear, instrument or organ.
Allah, Exalted be He, says, “There is nothing like Him. He is the All-Hearing, the All-Seeing.” (Surat Ash-Shooraa, 42:11)
Allah’s hearing encompasses all sounds, apparent and hidden. He hears everything His creation say or utter, and nothing is hidden from Him. His hearing encompasses the heavens and the earth.
The name As-Samee also means the One who answers the prayer of those who worship Him and pray to Him.

Affirming the attribute of hearing to Allah and believing that He hears in a manner that befits His majesty and greatness without changing the meaning of this attribute, denying it completely or likening it to that of any of His creatures.
Fearing Allah and watching one’s tongue for fear of saying some thing, quietly or loudly, that is displeasing to Allah.
Praying to Allah, begging Him to grant our requests and fulfil our needs, in this life and in the hereafter, remembering Him while experiencing peace and tranquillity in His presence, thinking well of Him and having good expectations of Him, for He is the One who hears our voices, answers the prayer of those who pray to Him and accepts the good deeds from the pious.

The One whose hearing and attention comprehends everything. The One who pays attention to every supplication and invocation.

The One who listens to every voice. The One who hears and accepts every word, thought and secret.

The One who listens to everything, perfectly, eternally, without limitations.

From the root s-m-‘ which has the following classical Arabic connotations:

to hear, to listen
to accept, to receive, to be told
to pay attention to, pay regard to
to understand the meaning

Imam al-Ghazālī has said that in order to explore the depths of an attribute of Allah, one must venture far beyond the human expression of such a quality:

When you elevate the All-Hearing above changes which happen to Him when audible sounds occur, and exalt Him above hearing by ears, you will realize that His hearing is an attribute by which the perfection of the qualities of things heard is disclosed. Whoever does not not take care in considering this matter will inevitably fall into mere anthropomorphism. So, be wary, and be precise when you consider it.

The word samā’ (often written sema in Turkish), which literally means hearing or paying attention to, is commonly used to describe the musical gatherings of the Sufis, especially the great whirling dance of the dervishes.