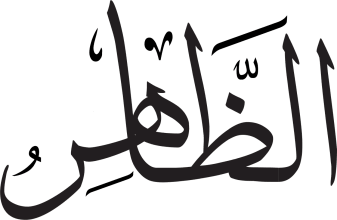 Male
Female
Child
The One that nothing is above Him and nothing is underneath Him, hence He exists without a place. He, The Exalted, His Existence is obvious by proofs and He is clear from the delusions of attributes of bodies.

Allah, Exalted be He, says, “He is the First and the Last, the Outward and the Inward; and He has full knowledge of all things.”(Surat Al-Hadeed 57:3)

The meaning of the name Adh-Dhaahir (the Outward) is the great and the elevated One who is above everything.
The meaning of Al-Baatin is the One who is nearest to everything and everyone due to His awareness of all the secrets, and what is yet more hidden. These two names are amongst those names of Allah which always come together, for absolute perfection is realised in their combination, and they cannot be used separately.

Worshipping Allah, knowing full well that He is aware of everyone and everything in His absolute knowledge, greatness and power, and that there is nothing that is hidden from Him.
Steadfastly dedicating ourselves to worshipping Allah, Exalted be He, and turning to Him alone to grant our requests and fulfil our needs.
Purifying our inner selves, extolling Allah whose knowledge encompasses everything and being aware of His nearness to us.

The One whose nature and existence is demonstrated in all of creation.

The One whose essence and attributes are shown throughout all of creation.

The One who is above creation, yet who is made visible through creation.

From the root z-h-r which has the following classical Arabic connotations:

to be visible, manifest, obvious, clear, distinct
to open, to come out, to cause to appear after being concealed
to be conspicuous, distinct
to ascend, mount, have higher status
to have the upper hand, subdue, overcome
to endorse, help, aid, support others, render superior

Note that the Arabic letter z sounds nothing at all like the English letter z, but rather is a open-jaw “th” sound.

The ancient root of z-h-r points toward that which goes from the center and spreads out, disperses or radiates into being, which is to say that it becomes outwardly manifest.

Zāhir is that which is outward, manifest, apparent, visible.

Bātin is that which is inward, concealed, obscured.